Google AI Researcher Accused of Sexual Harassment
So much for Google's "don't be evil" bullsh*t.

he was the voice of the hillary clinton campaign ads
Top

he was the voice of the hillary clinton campaign ads

morgan freeman issued a fake apology. He didn't apologize for what he did just said he was sorry if anyone felt uncomfortable
Morgan Freeman apologizes in wake of harassment accusations

“Anyone who knows me or has worked with me knows I am not someone who would intentionally offend or knowingly make anyone feel uneasy,” the actor, now 80, said in a statement sent to The Associated Press by his publicist, Stan Rosenfield. “I apologize to anyone who felt uncomfortable or disrespected — that was never my intent.”

One of the incidents was described:

The CNN report includes the account of a production assistant on the 2017 heist film “Going In Style,” who detailed an incident in which the actor repeatedly tried to lift up her skirt, and asked if she was wearing underwear. She alleged that Freeman subjected her to unwanted touching and comments on a near-daily basis on the film.

Hard to imagine how that could make anyone feel uncomfortable
Top

He then proceeded to defend Franken and question the legitimacy of some of the accusations against him.
"I will be honest,” he said, “the Franken case, for me, was a difficult case, a hard case."
He cited the support Franken received from women at ‘Saturday Night Live’ and called the first accusations, from radio anchor Leann Tweeden, “fantastic.”
"There may be things I don’t know. But maybe I’m just an old-fashioned person, but it seemed to me that there were 29 women on ‘Saturday Night Live' that put out a statement for him, and that the first and most fantastic story was called, I believe, into question," he said.

"fantastic" can have two meanings

Since Leann Tweeden had photograpic evidence Franken groped her


In recent months, Moonves has become a prominent voice in Hollywood’s #MeToo movement. In December, he helped found the Commission on Eliminating Sexual Harassment and Advancing Equality in the Workplace, which is chaired by Anita Hill. “It’s a watershed moment,” Moonves said at a conference in November. “I think it’s important that a company’s culture will not allow for this. And that’s the thing that’s far-reaching. There’s a lot we’re learning. There’s a lot we didn’t know.” 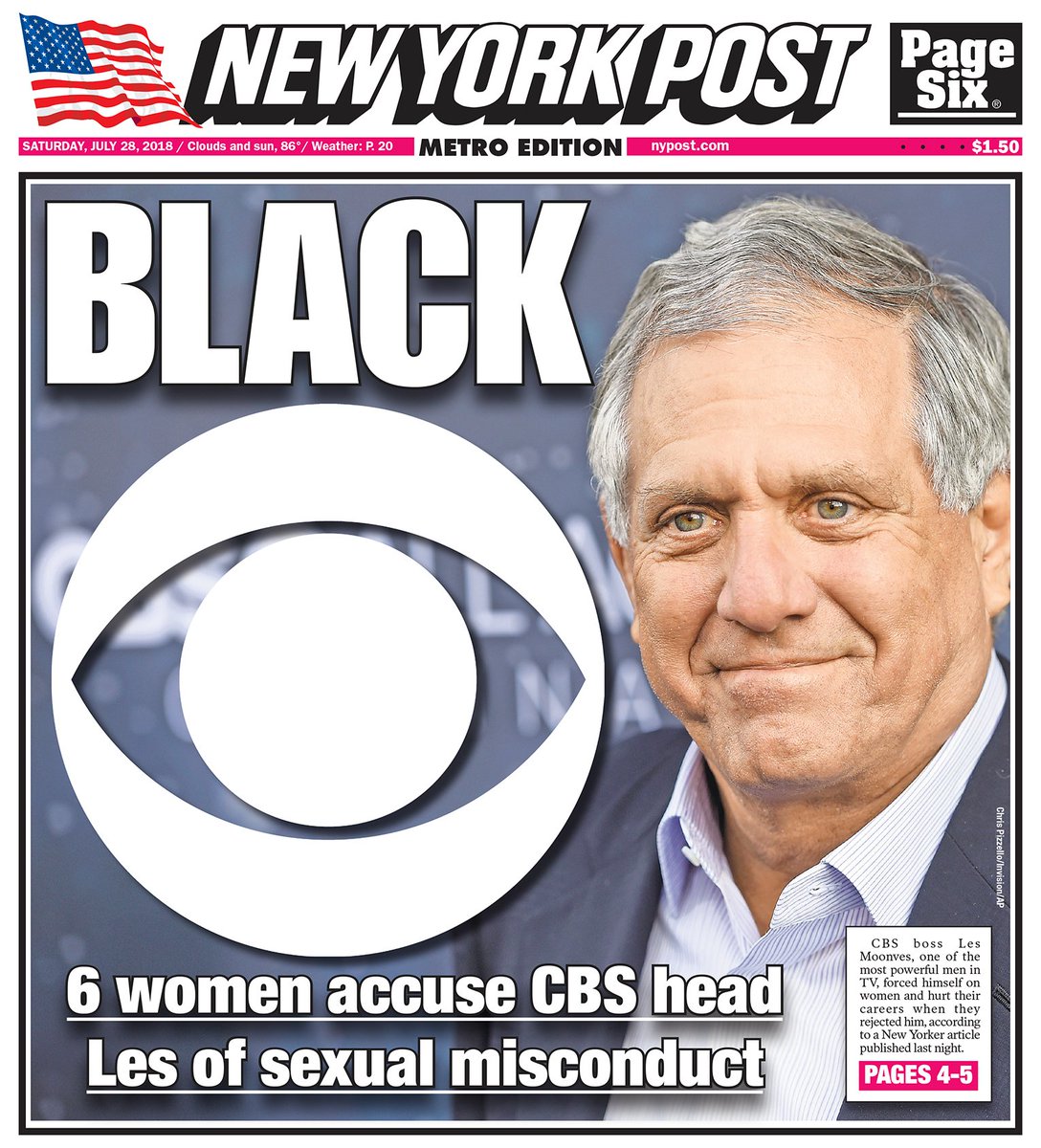 Keith Ellison, who was the first muslim congressman and deputy head of the DNC, is stepping down from congress after 12 years and running to be the state AG in Minnesota.
The primary is Tuesday.
He's been hit this weekend by domestic abuse allegations posted to Facebook by the son of his ex-girfriend. At least one of the other democrats in the primary has forwarded the son's facebook posts
The son claims there's a video but hasn't yet produced it
Top

Muslim and democrat. Obviously a bad guy! At least we have iron clad evidence in the form of an alleged Facebook post.
Top

Muslim and democrat. Obviously a bad guy! At least we have iron clad evidence in the form of an alleged Facebook post.

Domestic abuse, if true, would make him a bad guy, and in the recent past, people have been read out of the company of decent men over less substantial allegations than this

What happened to every victim "deserves to be heard, believed, and supported?"

From the timing, the son wanted to harm Ellison but not the democrats.
Top

Please read, if you care about my mother please share. I love you momma, you wont have to stand alone

, I was using my moms computer trying to download something and I clicked on a file, I found over 100 text and twitters messages and video almost 2 min long that showed Keith Ellison dragging my mama off the bed by her feet, screaming and calling her a “fucking bitch” and telling her to get the fuck out of his house.

the ex- confirms it

, “What my son said is true. Every statement he made was true. Keith Ellison, you know you did that to me.”

some of Ellison's fellow democrats have had the courage to stand with Ellison's victim (I know, she's a survivor not a victim)

DFL-endorsed candidate Matt Pelikan told WCCO-TV he believes Monahan.
“I think we have to believe allegations that come forward. The saying ‘We believe women’ means that we support women and we need to give all allegations a fair hearing … the woman in question here has a long history in progressive circles. The focus should be on listening to her,” Pelikan said.

We have a second accuser

ellison has been in congress since 2007
Before that, he spent 4 years in the Minnesota House. During which time, another woman accused him of domestic abuse

Accused woman abuser Keith Ellison easily won the Minnesota Democrat Primary for Attorney General
So much for #MeToo
What happened to every victim "deserves to be heard, believed, and supported?"

Who is online In total there are 12 users online :: 0 registered, 0 hidden and 12 guests
Users browsing this forum: No registered users and 12 guests based on users active over the past 5 minutes
GZIP: On
×