So if the object is a black hole, the length of a wave approaching it decreases so much (below the Planck scale) that it shrinks into a massive, high energy "point"?
It somewhat brings to my mind the physics of a shock wave and a sonic boom in a medium: propagating disturbance that moves faster than the local speed of sound in the medium. However, while these are observable physical effects, described by a basic theory of waves travelling in a medium, about photons we say that when they have such high energies our physics doesn't apply.

Just saw it on BBC, a bit of off-topic, but still related to waves (sonic booms) and nice: https://www.bbc.com/reel/playlist/ingen ... d=p074bhmz
Top

sorry that was weak field approximation, the exact solution is (weak and strong fields)
\begin{equation}
r_s= \frac{R_LR_h(\lambda_h^2-\lambda_L^2)}{\lambda_h^2R_h- \lambda_L^2 R_L}
\end{equation}
and from this we have all major gravity phenomena only from a beam of light.

"So if the object is a black hole, the length of a wave approaching it decreases so much (below the Planck scale) that it shrinks into a massive, high energy "point"?"

Modern physics have a series of major issues

They cannot connect gravity with the quantum in any decent way.
QM is not compatible with Minkowski space-time.
They have no clue about Newton's gravity constant, except it is some value calibrated to gravity observations that do not change for different experiments, so yes it is a constant.
Endless lame interpretations in QM, that predictions fits observations dose not mean it is a very deep theory.


I finally did some gravity derivation directly from atomism.
Gravity by finding the diameter of the indivisible particle, gravity is collision space-time, completely unknown to modern physics in all aspects.
Modern physics have only (unknowingly) the number of collisions as a collision ratio (this is kg actually)

Finally a Unified Quantum Gravity Theory!
Collision Space-Time: The Missing Piece of Matter!
Gravity is Lorentz and Heisenberg Break Down at the Planck Scale.
Gravity without G 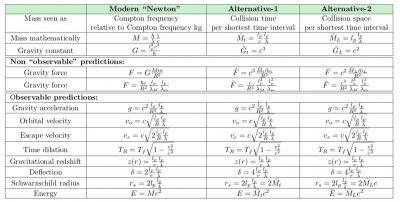 Collector, I appreciate your fundamental contribution to physcis but must ask you a question: why here? There're universities with departments of physics, there're dedicated journals, there're internet pages. Don't you think they're your proper audience? Not us, our field is different.
Top

This is an off topic section and Collector's posts inspire many interesting discussions.
Moreover, nowadays all disciplines analyse problems at such a level of complexity that we turn to multifaceted approaches. It requires proficiency in thinking in different contexts.
Top

because I was thinking of you in particular Gamal, I wanted u to be the third one to know!
Top

No way. All redundant knowledge is a bias in thinking, we should know only necessary things.

I sometimes meet physisists who think they know everything on quantitative finance. They usually make me laugh, alltough sometimes they make me cry.
Top

The reverse can also be true.
Top

"They usually make me laugh, alltough sometimes they make me cry."

yes I understand you cry when you think they are idiots and they actually take money from you in the market. I feel with you! This means their models (or understanding of flawed models) where better? So yes finance is easy, the market will tell the truth. Physics is harder as one have a whole religious-movement believing in such things as the untouchable Newton constant G, that Newton for good reasons never mentioned or used! After all he was well studied in atomism! And there is no market to trade gravity?
Last edited by Collector on May 6th, 2019, 9:31 am, edited 1 time in total.
Top

Hmmm... How do propose to summarize your discovery?
email mark@brezina.dk, facebook https://www.facebook.com/markbbrezina
Top

Hmmm... How do propose to summarize your discovery?

The abstract is a good start

"Based on a very simple model where mass, at the deepest level, is colliding indivisible particles and energy is indivisible particles not colliding, we get a new and simple model of matter that seems to be consistent with experiments. Gravity appears to be directly linked to collision time and also the space the collisions take up; we could call it collision space-time. This leads to a completely new quantum gravity theory that is able to explain and predict all major gravity phenomena without any knowledge of Newton’s gravitational constant or the mass size in the traditional sense. In addition, the Planck constant is not needed.

We also introduce a new quantum wave equation that tells us that gravity is both Lorentz symmetry break down and Heisenberg uncertainty break down at the Planck scale. Our wave equation in this sense includes gravity. For masses smaller than a Planck mass, probability will also dominate gravity; it is then a probability for Heisenberg uncertainty break down. At the Planck mass size and up, determinism dominates.

For the first time, we have a quantum theory that unifies gravity with the quantum, all derived from a very simple model about the quantum. Our theory is simple, and we show that an indivisible particle is the fundamental unit of all mass and energy – a quantity that has been missing in physics all this time. Newton was one of the last great physicists who thought that such particle was essential, but it was naturally impossible for one man to solve the entire problem. This paper stands on the shoulders of giants like Newton, Einstein, Planck, and Compton to explore these long-standing questions."

Alright, do you have any experiment data?
email mark@brezina.dk, facebook https://www.facebook.com/markbbrezina
Top

the same as the rest of the world mostly, for example experiments shows: Discovery that quasars don't show time dilation mystifies astronomers (the paper itself
On time dilation in quasar light curves )

Not consistent with standard theory without inventing even more fudge factors, like back holes growing exactly as fast as to offset time-dilation, what a fantasy these guys have to fudge their models, rather than going back to the drawing board and ask, what are we missing in our foundation!

More important the theory is simplifying a series of things, and the beauty of the atomist gravity theory is that it keeps almost all existing and well-tested equations completely intact (unchanged) all the way to the Planck scale. Anything else would be a surprise; after all, some areas of physics have been extremely successful in predictions and have also been well-tested. Still, in our work, the Planck scale and all equations are united into one simple and powerful theory. Unlike standard physics, there are no inconsistencies in our theory.
Last edited by Collector on May 6th, 2019, 9:58 am, edited 1 time in total.
Top

Yes, but you're answering on an entirely different topic now. Do you have experimental data on breaks of Lorentz Symmetry?

I agree that the topics within physics is starting to get silly, inventing ever more clever ways to stay put with the standard model and the current cosmological models
email mark@brezina.dk, facebook https://www.facebook.com/markbbrezina
Top

"breaks of Lorentz Symmetry?" For sure, read my paper and it is clear all gravity must be Lorentz symmetry break down. So yes can we observe gravity? sure, everywhere, you can even feel it on your body!
Top