Yes, but you're jumping the question again. Did you or did you not have any experiments with lorentz symmetry breakdown?
email mark@brezina.dk, facebook https://www.facebook.com/markbbrezina
Top

I am not jumping the question, you are not studying what I have presented before you ask question. My gravity is clearly directly linked to the a indivisible particle that not can move when colliding, and that only can be observed directly from the particle itself, so an absolute frame so to say. However it leads directly to gravity. And yes I have tested it in my state off the art Cavendish apparatus, that combine old mechanics with modern electronics, my paper on this in for consideration. But it is not even needed, because it is so obvious when one first understand it. But it takes time to see it, I could see Lorentz symmetry break down in my theory already more than a year ago, but first when I derived gravity I could see it clearly is gravity itself.

So what modern physics have been searching and searching and searching for without finding any hints off have been just in front of their nose all the time, it is gravity. Explains also why they for 100 years not have been able to combine the quantum world with gravity. But they had it indirectly in gravity all the time due to it was packed into their unknown parameter, where the unknown is, namely G in their model. Read the paper, study it for some days, weeks and see if u get it.

And yes I can also predict all gravity phenomena without any knowledge of G, or any knowledge of the incomplete modern mass measure. This can be done in series of ways. Simpler and better, and all consistent with each other! Unified is Here!
Top

Modern physics is top-down theory, with most equations right, but due top-down and not fully grasping the full depth they have not been able to connect their various models. My theory is bottom-up! Bottom-up is no guarantee for success, I guess superstring theory is such a failed attempt (that just added complexity without any success). Yes it has to fit experiments!! As my theory do, perfectly! And it is much simpler than standard theory, all the spookiness is gone!

Any gravity theory incorporating G without understanding it is a composite constant is clearly a top-down theory that will miss out of that gravity is Lorentz symmetry break down and Heisenberg uncertainty break down at the Planck scale. But yes it is now solved!

Yes, but you're jumping the question again. Did you or did you not have any experiments with lorentz symmetry breakdown?

AFAIR this was done > 100 years ago on TCD's cricket pitch

In my day I usually used the cricket pitch to study Newtonian and Hamiltonian mechanics. What a fall was that. The crowd loved it.
What you don't see is the spin .. by the time we reach the ground I'm on top. Aka centrifugal force. 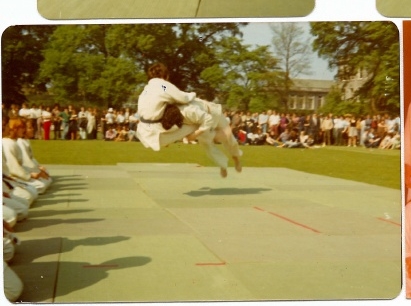 No way. All redundant knowledge is a bias in thinking, we should know only necessary things.

I sometimes meet physisists who think they know everything on quantitative finance. They usually make me laugh, alltough sometimes they make me cry.

The problem with those academic physics drop-outs is that they don't have the understanding deep enough to know the models' assumptions and context. Those are hardly ever transferable between problems even within the same discipline. Computer scientists using statistics are similar - making up the science of statistical fallacies. Anyway, physicists deserve Collector's revenge

If the Lorentz symmetry is broken, then by the Noether's theorem the energy isn't conserved. In Einstein's GR it is "fixed" by introducing the curvature of space. Is this lack of conservation an actual feature of your theory or is it something local - compensated by some other effects?

"If the Lorentz symmetry is broken, then by the Noether's theorem the energy isn't conserved."

Correct, energy is not conserved, it can turn into mass, which is the same as gravity, mass is gravity and gravity is mass. But yes energy-mass(gravity) is clearly conserved in my model. In my model there is no fantasy imaginary particles popping in and out of existence, the indivisible particles are indivisible, they where not even created in a fantasy big bang! They were never created and can never get destroyed. Newton got it!!

Lorentz symmetry break down is simply that energy can be converted to gravity(mass). This is Crystal clear from my paper!. Modern physics have almost no clue what mass is! Non of their so called fundamental particles are pure mass, the electron switches between energy and pure mass state approx 10^20 times per second, as explained in my papers.

I bet Noether did not understand that energy turning into mass was Lorentz symmetry break down. Hard to understand before one understand that any particle observed in observational time-window longer than a Planck second must quickly internally switch between energy and mass (at the Compton frequency), but yes one cannot hide gravity, so fully detectable!

They have totally missed out of what gravity is in modern physics. They have missed out on what the Planck scale is! Top-down theory, full of buzz words!

The boring part, most of physics equations are correct all the way to the Planck scale, this just bind it all together.
Top

So does your "mass (gravity)" correspond to Einstein's spacetime curvature?

BTW, Lorentz symmetry violations exist in condensed matter physics. They are quasiparticles, solutions of Dirac equation, called Dirac fermions. So-called topological materials (e.g. graphene) "host" them. Their theoretical model is mathematically very similar to that of GR. Such materials are a good test-bed for GR. Maybe you'll get a chance to test your theory in this way.

@anti-fragility and being shot by models
I hope I'll never meet you and Nassim Taleb. I wouldn't get out of it alive.
Top

"it can turn into mass, which is the same as gravity, mass is gravity and gravity is mass"

No. Gravity is one side of the Einstein equation (curvature tensor), mass is on the other (stress-energy tensor).
Top

Is there "=" between the two sides?

"it can turn into mass, which is the same as gravity, mass is gravity and gravity is mass"

No. Gravity is one side of the Einstein equation (curvature tensor), mass is on the other (stress-energy tensor).

Off course they have a very different mass measure. Modern physics mass definition (unknown to themselves) is at a deeper level collision frequency ratio as shown in my paper, they do not have collision time/space (collision space-time) in their mass model and must therefore get gravity in as something else. Why they never will get unified theory.

This is the whole point, they have missed out on one important part of mass. GR in its current form can never be unified, without understanding mass is also collision time. The idea of point-particles is nonsense, something Newton naturally with his correct view of light particles never would have accepted!

And no reason to look for unified theory anymore. It is done now! Sure details to do, leave it for the tailors!

Your saying just prove u did not bother read my paper before u attack it, or u do not understand it, I would think a combination!

Modern physics has missed out off one of two important aspects of mass, their theories get clouded in complexity and buzzwords, not needed at all if one understand the depth of reality!
Last edited by Collector on May 6th, 2019, 3:44 pm, edited 3 times in total.
Top

And no reason to look for unified theory anymore. It is done now!

Has your result been peer-reviewed? Otherwise, we will never know.

The nice thing about maths is that it is either right or wring; it had its navel-gazing period a while back.
Last edited by Cuchulainn on May 6th, 2019, 3:15 pm, edited 1 time in total.
http://www.datasimfinancial.com
http://www.datasim.nl
Top

it will take some collision-time first!
Top

it will take some collision-time first!

Who is online In total there are 75 users online :: 1 registered, 0 hidden and 74 guests
Users browsing this forum: Google [Bot] and 74 guests based on users active over the past 5 minutes
GZIP: On
×