It’s bored “with” it. But apart from that I tend to agree with the sentiments. I have written before that physicists should suffer from economics envy not the other way around.

Thanks. (Also to Cuchulainn.) I need to think if I'm bored by or with physics...

Anyway, I haven't noticed any physics envy among economists or other social scientists. Maybe because I work with people who do something practical and not just fart in a stool at some uni. Majority of social scientists I've met have well-guided scientific mission and work ethos, and considerably higher research and personal culture than physicists.

The only thing to envy the physicists is the simplicity and impunity of their work:
- deductive logic with its beautiful completeness: the absence of evidence becomes the evidence of absence. One could think that it is a better way to prevent rather than facilitate the progress of knowledge. Unless physicists won't get paid if they don't find the evidence - then they will keep searching, even if 40 years, until right before losing funds they find an unbiased 5-sigma evidence. Or was that 6-zeta significance? Who cares. No one knows exactly what are sigma and zeta.
- nomology: there's one and only one truth (yes, it is still physics, not Quran), and it's always true, unless it's in a black hole... But it's true that it's not true in the black hole. And the truth is that a black hole could suck in the whole Earth!!! Economists can suck at most a nation into oblivion by e.g. incorrectly assuming how wrong they are in their beliefs about here and now. Point for physicists this time.
- ivory towers detached from the world and reality like millionaire's private islands. Social sciences train system thinking - raze the walls and the reality blows in their faces from every direction. Such sports are only for people with a healthy spine.

I could go on, but to be honest I forgot what was my point... A shower! Yes, I need to take a shower.
Top

"We show that, if standard clock synchronization is adopted, the speed c turns out to be invariant in an open section of the contour only. Our result is due to the distinctive physical feature of the ‘time gap’ introduced by relative simultaneity in the closed contour." 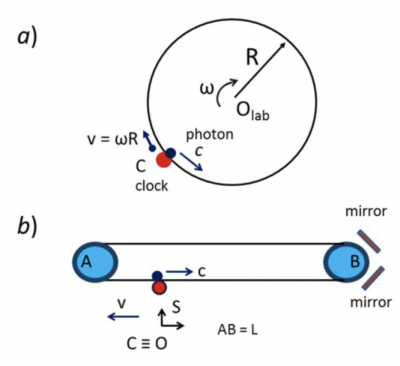 we gone Tube: speed of light in linear Sagnac  (english)

Paul Langevin and many others provided a simple derivation of „Sagnac effect” from Einstein’s theories. The derivation shows that one can't synchronise the clocks as assumed by Sagnac in his experiment. There will be indeed a time difference between the clocks, equal to the measured one. Explanations are easily found in the Internet, but I'd recommend Langevin's original paper.
Sorry guys, but Viking hallucinogenic mushroom won't help you beat King Albert

the great thing with linear Sagnac (that first was performed in 2004) is that we easily can isolate out acceleration effects, by simply making the belt much much longer than the radius of the two wheels, as we have demonstrated in the appendix acceleration effect are then negligible. We are not dependent on any clock synchronization as we only use one clock.

We are now writing another paper where we discuss GR more in detail related to this, how GR not can explain linear Sagnac results. However I am sure we will meet critics. If only dependent on one clock one avoid clock synchronization in the experiment. As is discussed in literature SR need a time gap for consistent explanation.

More to come, the 100 year + debate on one-way speed of light is not over.
Top

read  critics of Langevin interpretation by Selleri and others

"As first discussed by Langevin came 7- 8 years later and was as much as formally self-assured as substantially weak....The impression that Langevin, beyond words, could not be satisfied with his explanation is reinforced in his second article." – Selleri, Sagnac Effect End of the Mystery 2004,  in the book "Relativity in Rotating Frames" that I recommended here many years ago, is a good start to see pro and con views for various interpretations of Sagnac.

The Linear Sagnac experiment first introduced in 2003/2004 makes it much easier to exclude a series of interpretations because all acceleration effects can be isolated out and made negligible in such experiments. The debate is on, the 100 year Sagnac debate will not go away any time soon. Or will it now that we have shown new isight...
Top

There's no disagreement on the derivation of Sagnac's result. It can be simply done in two ways: using SR or GR formalism (SR is sufficient to explain it).
Anyway, if you want to talk about this or more questions about Minimum Description Length and Bayesian inference with regards to optimising models/math formulas, sent them in email. I'm getting bored of social media and switching to the private mode

"There's no disagreement on the derivation of Sagnac's result."

well yes the disagreements is mostly on the interpretations, but yes also how much different researches actually have captured in their derivations and discussions on their derivations. The result from Sagnac when sent in air (close to vacuum) many experiments have repeated, so no disagreement on the observed result, at least to first order.

"Apparent disagreement with experiment as well as internal inconsistencies found in the traditional analysis of relativistically rotating frames/disks are summarized. " https://ui.adsabs.harvard.edu/abs/1999AmJPh..67..158K/abstract

Read the book i recommended and you will see much disagreement on interpretations.

and very little is published on linear Sagnac.

one also has to be very careful not mixing interpretations from observing when standing in lab frame (next to rotating frame) or being part of the rotating frame itself.

for example
"Winterberg [58] presented an “ether-interpretation” of the Lorentz contraction and “solved”the Ehrenfest paradox by calculating the deformation of the disk when it is put into rotation. He also suggested an experiment to test special relativity against the “dynamic Lorentz-Poincaré interpretation of the Lorentz contraction. E. M. Kelly [90] introduced a new sort of contraction (or expansion) for moving bodies to solve the Ehrenfest paradox. R. D. Klauber
[91] gave an analysis of space and time on a rotating disk based upon the assumption that the
special theory of relativity is not applicable to rotating frames."

---
There are also several other open questions related to Sagnac, for example there are at least 3 different interpretations in published litterature on how medium different than vacuum affect the result. I think I can see some reasons why they not agree also here.

""However, despite the passage of over fifty years since then, one unsolved problem remains: it is not precisely clear how the sensitivity of an RL to rotation depends on the refractive index…”

“there is no agreement among them as to whether the medium increases or decreases this difference or indeed leaves it unchanged. Nor do the experimental data fully clarify the situation.” Malykin - ‎2014, METHODOLOGICAL NOTES v. 57. No 7.
Top

I'm sorry for all the male people who can't calculate a basic external product. The problem with Sagnac and other antirelativists was that for too long no one serious had bothered to rebut their claims. Like weeds left to grow in the field. It established their "legacy". Now it's their time: the true science is dead - welcome to the era of Sagnac effects.
Bye bye!
Last edited by katastrofa on January 17th, 2020, 6:14 pm, edited 1 time in total.
Top

few of these are antirelativists, for example the Mansouri and Sexl transformation or the Levy transformation are still relativity theories, Sagnac can be discussed under such transformations as well, they have not abandoned the relativity principle. they are however question the isotropy of one-way. Question if one can have experiments distinguishing the different relativistic transformations or not.

In addition we naturally have issues such that SR is not compatible with minimum length, and therefore not compatible with quantum gravity. Certain parts of physics are allergic to any critics of any part of SR, why is that? The same people often are sure Einstein was wrong on his critics of spoky action at distance, and his critics of much of the strange quantum interpretations, where I am quite sure Albert where right (a deeper theory will show King Albert where right in his skepticism), more research soon coming on it.

Modern physics are often cherry picking from the gurus parts that fit their own theories, or the teaching they have been presented. Well I guess this has been done at all times, science is typically more biased than one think.
Top

Who is online In total there are 6 users online :: 0 registered, 0 hidden and 6 guests
Users browsing this forum: No registered users and 6 guests based on users active over the past 5 minutes
GZIP: On
×