There is a paper they wrote in August 1970, I think still not published, where equation (4) is substantially the same as eq. 10. This was just before they met up with Merton.

The genesis of the whole thing is fascinating. Black discovered what we now know as the PDE in 1968 or 1969, but incredibly Black, despite having a PhD in physics, had never studied differential equations. From what I can gather from the historical evidence they eventually solved it by taking Case Sprenkle’s formula, which is substantially the same as the BS formula except with empirically, rather than theoretically derived discount rates, and differentiated it.

In the 1970 paper they write “By working with the formulas developed by Sprenkle *we found a solution* to the differential equation and boundary condition.”

Black thought, on the basis of no-arbitrage arguments, that the appropriate discount rate was risk free. At that point they were ignorant of stochastic calculus. Enter Merton, who introduced them to the work of McKean, which was an introduction to Western readers of the work of Ito. See FN 5 of BS 1973.

The employment of the c.n.d. function is due to Case Sprenkle, probably the first to do so. If you look at Churchill 1963 p.155, referenced on p.644 of BS 1973, you see the function does not appear anywhere, nor AFAICS is it anywhere to be found in the original edition of Churchill 1941 (*Fourier Series and Boundary Value Problems*). In the 1970 paper they write “Sprenkle … shows that equation (8) can be simplified if it is written in terms of the cumulative normal density function N(d)”.  Equation (8) is obviously an integration.

Churchill nowhere mentions probability, that I can find, which is naturally associated by the cnd function, but not otherwise. Churchill was mostly writing about heat functions. Note also, as Sprenkle suggests, the c.n.d in those pre-computer days could only be evaluated through tables. Does anyone here remember tables? I imagine anyone who graduated in the 1970s would. I hated them.
Top

Does anyone here remember tables? I imagine anyone who graduated in the 1970s would. I hated them.

Tables? Of course!
Logs, antilogs, long division of polynomials at school. Not to mention my favourite Latin conjugation and declensions.
In the early 70s we just used IBM S/360.

What we are now witnessing is a mass data scientist deskilling exodus. 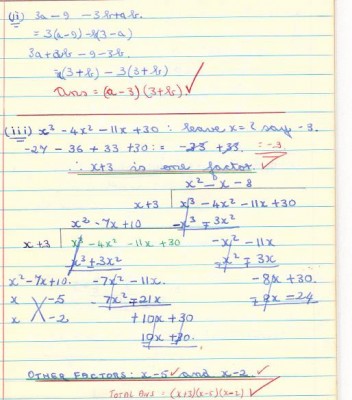 but incredibly Black, despite having a PhD in physics, had never studied differential equations.

Physics is not mathematics. Black probably did not meet John von Neumann on his travels.

He was initially expelled from the PhD program due to his inability to settle on a thesis topic, having switched from physics to mathematics, then to computers and artificial intelligence.  He became a student of MIT professor Marvin Minsky

If you peed it in the snow, that would be something.
Top

publisher did not like it! it was censored! This was when I was a fan of the formula, so it is not at all meant as an offense!

I still have the bad-ass cartoon book somewhere, but can no longer find it on amazon, likely the cartoonist book was censored out in our modern times. (forbidden books) 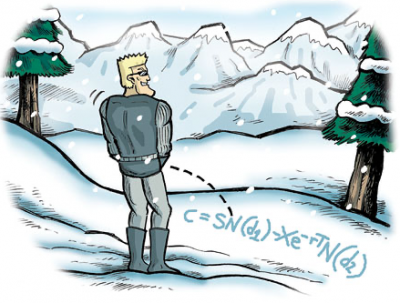 I brought a more formal approach to modeling options when I joined a trading desk in the early 90’s, but the old school guys I sat with were fond of using analogies to explain certain facets of option trading. The analogy they used for the sigma root T term was as follows. To compute bond accrued interest, one takes the annual coupon and multiplies it by a time accrual factor. So, they likened the root T term to a volatility time accrual factor to adjust the annualized volatility number for the option expiry period. If memory serves correct, they described sigma x root T as the effective volatility of the option. Yes, sloppy, but the real proof is ultimately how much money you make trading, isn’t it?
Top


publisher did not like it! it was censored! This was when I was a fan of the formula, so it is not at all meant as an offense!

I still have the bad-ass cartoon book somewhere, but can no longer find it on amazon, likely the cartoonist book was censored out in our modern times. (forbidden books)

There are better formulae to piss on these days, mostly in Physics.

As long as you can hold it between sqrt and T... I had a funny professor of statistical chemistry at the Academy - he used to say that he would teach students as long as he can hold two things: the chalk and urine.
Top

OK, a quiz for everybody: guess the publication date: 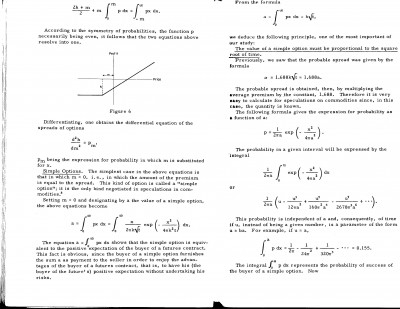 OK, a quiz for everybody: guess the publication date:
Quiz.jpg

That's 3 guesses.
Yes, Bachelier (1900). Contains zillions of c.n.d.'s, although he doesn't use that phrase.
www.financepress.com
Top

It's the translation from Cootner's 'Random Character of Stock Market Prices'.
Saying `original publication date' would have been too much of a clue ...
www.financepress.com
Top

Who is online In total there are 9 users online :: 0 registered, 0 hidden and 9 guests
Users browsing this forum: No registered users and 9 guests based on users active over the past 5 minutes
GZIP: On
×