scott pruitt was highly effective as epa administrator, which is why the libs hate him.
there were a whole bunch of incidents like this one:

more on epa administrator Scott Pruitt, who is in trouble because he spent $43k of government money on a secure phone booth, and by law he was supposed to notify Congress of expenditures for office furnishings over $5,000.
Is a secure phone booth "office furnishings?" you  ask. And the answer seems to be, "no when Obama was in power, yes when Trump is president"
During the Obama years, Energy Secretary Ernest Moniz spent $1.2 million of government money on a secure communications room (not just a phone booth). without notifying Congress,  and no one batted an eyelid.

You are being deliberately silly again, ppauper...
Top

that's exactly what happened.
Obama's Energy Secretary spent $1.2M on a secure communications room. And I'm not criticizing him for that: if it was needed then it was needed.
When Administrator Pruitt spent $43k on a secure phone booth, the Dems decided it was "office furniture" and manufactured outrage.
And before you know it, the haters start referring to Administrator Pruitt as "ethically challenged"

We're all human. Administrator Pruitt could only take so much of the hatred and bile spewed at him by the haters on a daily basis. More to the point, like any other decent human being, he wanted tp protect his family from the haters

"However, the unrelenting attacks on me personally, my family, are unprecedented and have taken a sizable toll on all of us."

The haters have won this one, and driven a good and decent man from office.
Administrator Pruitt's outstanding work in modernizing and reforming the ERA has played a key role in the jobs boom we have seen under President Trump.
Thank you, Administrator Pruitt, for a job well done. We wish you could have stayed longer, but we realize that your family comes first
Top

the most oft-used method of scoring judges seems to be the Judicial Common Space scores, which rate judges as liberal versus conservative
If you look at the current court (scalia who died is the white dot and he was replaced by gorsuch who is the orange dot), 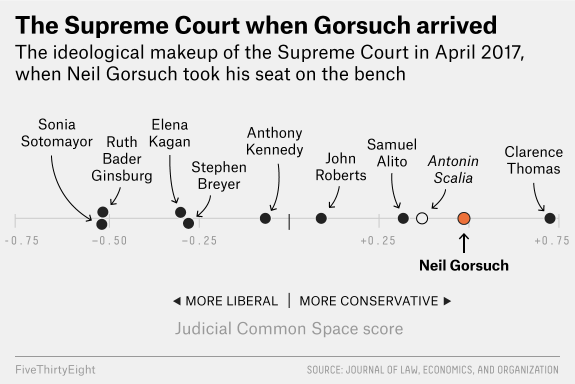 the pic is from fivethirtyeight . com (538 being the number of votes in the electoral college)

there are 2 justices pretty much in the middle: kennedy (who is retiring) is just left of center and roberts, the chief justice appointed by bush 2) is just right of center
so you can think of the current court as either
(a) 5 liberals and 4 conservatives
or (b) 4 liberals, 3 conservatives, and 2 swing votes
If we get a solid conservative, then it's either 5 conservatives to 4 liberals, or even-stevens with 1 swing vote

The first NATO supreme commander, Gen. Eisenhower, said in February 1951 of the alliance: “If in 10 years, all American troops stationed in Europe for national defense purposes have not been returned to the United States, then this whole project will have failed.”

Got to get that Chick-fil-A business going!
Top

Got to get that Chick-fil-A business going!

Got to get that Chick-fil-A business going!

if you're having some sort of weird sexual fantasy about scott pruitt, please keep it to yourself
Top


Got to get that Chick-fil-A business going!

if you're having some sort of weird sexual fantasy about scott pruitt, please keep it to yourself

Erm, I guess you missed out on all the exciting antics of The Great Administrator, he who was granted his post by Divine Providence...

At any rate, I thought this was a very amusing take on it:
https://www.washingtonpost.com/blogs/co ... 361de654c7
Top

that would be "moisturized" not "moist"
Top

Let's look at what happened during the obama administration

Records obtained by the Washington Examiner under the Freedom of Information Act show that HHS executives spent $31 million taking 7,000 first class and business class flights between 2009 and 2013, including 253 trips for which a one-way ticket cost more than $15,000.

Exceptions for business or first class are made for specific criteria.
The most common reasons across agencies for such "premium" flights in 2012 and 2013 were medical necessities and flights with more than 14 hours of travel time.
Other reasons include special security risks, no coach flights available within 24 hours of arrival or departure time, overall cost savings, unsanitary coach accommodations on a foreign carrier, and a vague exception for upgrades "required for agency mission."

So Obama administration officials flew first-class because of "special security risks."
So WTH is the problem?
You can't have different rules because you don't like the guy in office.


During the obama administration,
HOLDER, MUELLER USED LUXURY JETS FOR PERSONAL TRAVEL
yes, that Mueller
Holder (AG) used government jets to take his family to the Belmont Stakes (part of the Triple Crown)

In 2014, Holder, while attorney general, boarded a government-owned Gulfstream and flew to the Belmont Stakes Thoroughbred horse race in New York with his daughters, their boyfriends and two security officers.
According to records obtained by The Daily Caller from the Department of Justice, that trip cost the government $14,440. But Holder only had to reimburse the government $955 for that flight -- the equivalent cost of a coach commercial airline ticket for each non-law enforcement passenger.

Where was the outrage?
Remember that infamous tarmac meeting between AG Lynch and BJ Clinton. Lynch took a government jet to get there
Top