for those interested in numbers, since  Congress enacted the National Emergencies Act on September 14, 1976,  presidents have declared 58 states of emergency, 31 of which are still ongoing.
Top

for those interested in numbers, since  Congress enacted the National Emergencies Act on September 14, 1976,  presidents have declared 58 states of emergency, 31 of which are still ongoing.

Trump as a property developer must know the legal intricacies of eminent domain pretty well.
Top

for those interested in numbers, since  Congress enacted the National Emergencies Act on September 14, 1976,  presidents have declared 58 states of emergency, 31 of which are still ongoing.

How many have lapsed?

58 total, 31 ongoing, 27 ended.
They are declared by an executive order.
The longest-running state of national emergency was the first one ever declared under the National Emergencies Act.
On November 14, 1979, President Carter signed Executive Order 12170, declaring a national emergency responding to Iran-sponsored terrorism.
Top

Statement by the Press Secretary on Venezuela
Top

What did he say, actually?

Ppauper, as the High Priest of the Church of Trump, can you provide an exegesis?

I wouldn't presume to so exalt myself.
The president has explained it very clearly, although of course the details are yet to be worked out.
For example, the US had a trade surplus with Mexico before NAFTA, which NAFTA converted into a deficit every single year, roughly $60-$80B dollar a year of late, with the cumulative deficit around $1 Trillion (with a "T") since NAFTA. .
Even though we were promised the opposite by Clinton and Gore when NAFTA  was implemented.

In the period from January 1994 through November 2016, according to Census Bureau numbers, the United States ran a cumulative merchandise trade deficit with Mexico of $986,532,000,000. 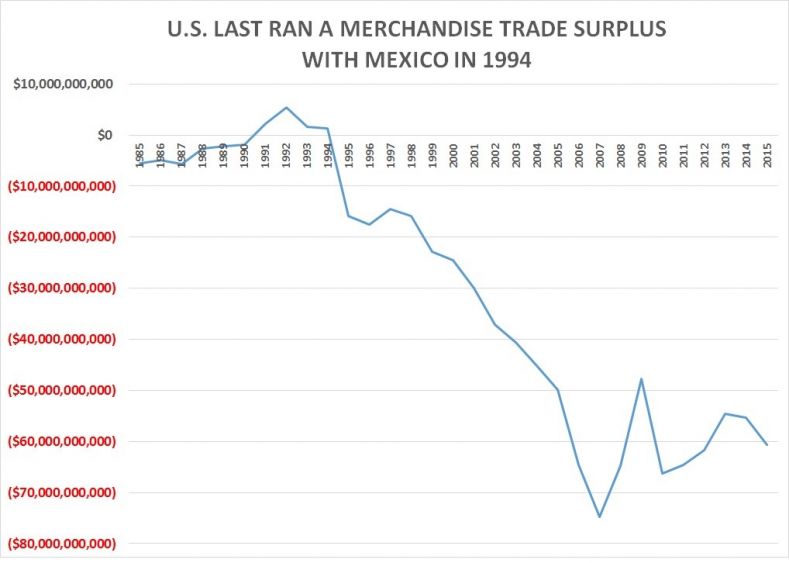 The new improved USMCA (US-Mexico-Canada Agreement) which superseded NAFTA, should cut that deficit somewhat, and before you know it, the wall will be paid for.

On a side note, there was a study by the Center for Immigration Studies think-tank (using National Academy of Sciences data) that showed that the wall would pay for itself in no time.
According to a 2016 National Academy of Sciences study, the lifetime "fiscal balance" (the difference between what they give to the government and what they receive back) of an immigrant with a bachelor's degree is on average +$183,000, and with more than a bachelor's on average $423,875. That sounds pretty good. The problem is that only 2% of illegal border crosses have more than a bachelor's, with a further 4% having just a bachelor's. 10% have some college, who have a fiscal balance on average of +$41,000, 27% are high school graduates, who have a fiscal deficit of -$69,750, and 57% have not completed high school, who have a fiscal deficit of -$173,375, pretty much the opposite of a Bachelor's degree holder.
Using those figures, the average fiscal drain of an illegal border crosser is something like $74,722, so a $20B wall would need to stop just 267,659 illegals to pay for itself.
The reason there are so few ilegals with bachelor's or higher is that many of them could work in the US legally anyway if they wanted under NAFTA (as could Canadians), so there was no reason to climb through the hole in the fence. I assume that holds true for USMCA which superseded NAFTA.

As for what the President actually said during the campaign, in March 2016 Candidate Trump told Sean Hannity that Mexico will pay for the wall through “the money we save on trade negotiations.”
Top

Silly. Just silly. Lying through his teeth, as usual. Here is one memo of his: Pay for the wall. The tiny little twists on NAFTA that his crack team negotiated sure don't have much to do with it.
Top

If you read the file you linked, it says

There are several ways to compel Mexico to pay for the wall including the following:

(my bold)
One of those ways was discussed with Hannity in March 2016 when then-candidate Trump told Sean Hannity that Mexico will pay for the wall through “the money we save on trade negotiations.”

Thank you for making my point
Top

the FBI and Mueller have been working on this all this time and found nothing. This was the "insurance policy," the attempt to stage a deep state coup and remove the elected president
Top

I’m happy for you that you think they found nothing. Treason carries an interesting range of possible penalties.
Top

I’m happy for you that you think they found nothing. Treason carries an interesting range of possible penalties.

Look - there is no question he was doing Putin's bidding. That is mostly a matter of public record. There are still questions around whether he did it on his own initiative, for ideological (a word he would probably not know how to spell) or commercial reasons; or because Putin has something on him. With some luck, Mueller will be able to shed light on this before he is shut down by the GOP machinery.
Top

the only president who did Putin's bidding was Obama President Trump was elected on 3 main planks:
trade deals
illegal immigration
no more stupid wars

A lot of us are sick of endless war in the mideast. Perpetual war for perpetual peace.
Traditional US foreign policy was to stay out of other people's wars. America should not go abroad in search of monsters to destroy. And steer clear of permanent "entangling" alliances. Let's go back to that.
WW2 ended in 1945. The Korean War Armistice was in 1953. The Cold War ended in 1991.
The US still has what 40k troops in Japan, 35k in Germany, and 23k in South Korea, to name just the 3 largest deployments. According to the chart below, the US has troops in 177 countries. The UN has 193 members. There are so many troops on Guam, which we use as a permanent aircraft carrier, that Rep. Hank Johnson was concerned that Guam would tip over and capsize.
In 2017, the US spent 3.6% of GDP on defense. We're defending Germany which spent 1.2%. Why should the US pay to defend Germany when they can't be bothered to pay to defend themselves? The US is contributing something like 70% of NATO defense spending with only 4 other NATO members spending the 2% of GDP they're supposed to (Greece 2.4%, UK 2.1%, Poland 2.0%, Estonia 2.1%). Forbes
The only time Article 5 (NATO collective defense) has been invoked was following the 9/11 attacks, when most of our NATO allies sent "non-combat" assistance.
I'll dig out that old Eisenhower thread again

The first NATO supreme commander, Gen. Eisenhower, said in February 1951 of the alliance: “If in 10 years, all American troops stationed in Europe for national defense purposes have not been returned to the United States, then this whole project will have failed.”

Who is online In total there are 12 users online :: 1 registered, 0 hidden and 11 guests
Users browsing this forum: gatarek and 11 guests based on users active over the past 5 minutes
GZIP: On
×