From the Models for Covid-19 thread in Numerical Methods:

We can sort of see the lag between cases and deaths in the worldometers data. South Korea is therefore interesting because cases have been level for a few weeks, as have deaths. From this it looks like the death rate is about 6%. Of course it could be less if not all cases are reported or if death is attributed to the virus in "error" ("with" rather than "from"). But equally it could be higher (again distinction between "with" and "from").


Maybe I am reading it wrong but the graph of  Outcome of Cases says to me the death rate is trending down from 2.88% (Apr 1 value), so likely below that level. If people take at least a month to die, then the current deaths from the chart you reference are more likely coming from the surge period when daily new cases were around 500. That would put the death rate around 1.5%, a more plausible ultimate asymptote to the Outcome of Cases chart.


Number of new cases in South Korea has plummeted but number of new deaths hasn't changed much. Their treatment is getting worse!

**
A few somewhat morbid comments, but it's reality.

Do you have any data on the cause of death, e.g., pneumonia as opposed to infection/sepsis?

Some people may have survived the pneumonia, but became septic - perhaps due to being on the ventilators. Naturally, the ICU staff can fight this with antibiotics, but they won't always win.

Also, what would the normal process for decisions on taking someone off a ventilator be in S. Korea?

With or without a shortage of the machines, after a certain period of time, if someone is not starting to "ride the vent" as they call it here - which means breathing is being assisted by the vent, but the person is participating in the process (it's not being done completely by the machine) - then the hospital will discuss the outlook and plan of action with the family.

Can't really say that the care is getting worse there - more that nature and perhaps legal/medical decisions are taking their course at a certain pace right now.
Top

Yes, well, I have not been looking specifically at S. Korea and this will be the case almost everywhere.

However, as we noted earlier, R0 may be more like 5.7 instead of 2.x (studying current papers on that in next few days), and we'll just have to see where the mortality rates come out for each region, even as publicly acknowledged, with flaws and omissions.
Top

You should look across countries. There's a lot of info there. For example, we don't know what "tested" means in each country nor what "deaths" means but assuming consistency within a country you might be able to calculate best- and worst-case parameters. Also get some idea of effectiveness of various strategies (at least strategies are fairly transparent!). There are extremes: Sweden, Germany, South Korea, Taiwan, NYC,...

It's still a stupid model. I think the use of R0 tells us more about the modellers than about any virus it's used to model.
Top

Have been working on comparisons in Europe. China is not a fair comparison due to a) very strict lockdown and b) people mainly living in apartment buildings.

Here is a tool just launched last week for Europe.

Focus is on comparative policy response across a wide range of countries.

Which yield this, on secondary spread using the SEIR model, which may be of interest for the Modeling thread.

From Japanese research team, published in the Journal of Clinical Medicine

Found via this article:

"On nextstrain.org, a site he co-founded, Bedford has created coronavirus family trees (example below) that include bat, civet, SARS, and 2019-nCoV sequences. (The trees are interactive—by dragging a computer mouse over them, it’s easy to see the differences and similarities between the sequences.)"

Bedford points at a long history - dating back decades for this virus to evolve.

"Bedford’s analyses of RaTG13 and 2019-nCoV suggest that the two viruses shared a common ancestor 25 to 65 years ago, an estimate he arrived at by combining the difference in nucleotides between the viruses with the presumed rates of mutation in other coronaviruses. So it likely took decades for RaTG13-like viruses to mutate into 2019-nCoV."

With the number of positives out there, I have been wondering if many more would test positive, due to the existence of latent strains we may be carrying (and have had for years - not due to this current incidence). If not expressed and never tested...  Do all of the tests being administered now differentiate between the strains, which number at least 5 for nCov alone.  Will see if there is information on this.

In any case, for those interested in the genomic side of things, this is useful and the article also notes some critiques of Bedford's work.
Top

Have been working on comparisons in Europe. China is not a fair comparison due to a) very strict lockdown and b) people mainly living in apartment buildings.

We are already overexposed to everything Chinese. It would be a big mistake to include data for a virus pandemic as well!
Top

Back to the lab - the so-called conspiracy theory gains credibility.

“... Rogin writes that, “What the U.S. officials learned during their visits concerned them so much that they dispatched two diplomatic cables categorized as Sensitive But Unclassified back to Washington. The cables warned about safety and management weaknesses at the WIV lab and proposed more attention and help. The first cable, which I obtained, also warns that the lab’s work on bat coronaviruses and their potential human transmission represented a risk of a new SARS-like pandemic.”...”

Watching the news unfold about the coronavirus made me think about this thread.

Some sources point to a seafood and live animal market, but Wuhan is also the location of a large bio research lab. 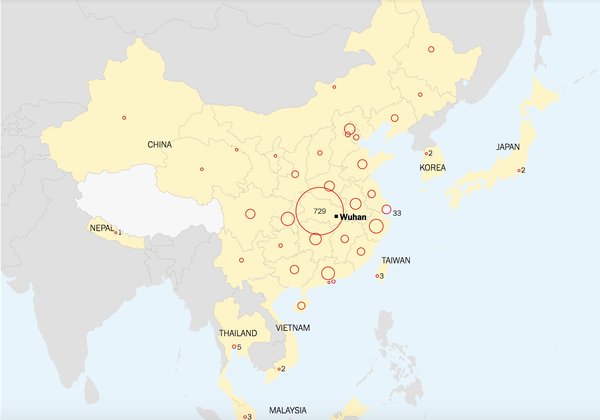 In the US, as of 1/24,
"The CDC is also investigating another 61 potential cases from 22 states. Eleven have tested negative, and results from the rest are pending."

My post here on January 25, but China was in complete denial, then and now.
Top

Lina says that China’s size justifies this scale, and that the opportunity to combine BSL-4 research with an abundance of research monkeys — Chinese researchers face less red tape than those in the West when it comes to research on primates — could be powerful. “If you want to test vaccines or antivirals, you need a non-human primate model,” says Lina.


Animal models are useless and even harmful. The best example is the tuberculosis vaccine: first trials killed people despite "positive" outcomes in non-human animals. That's standard we rarely find out about.
Almost 100 years gone and the hordes of morally-deficient wanton cunts (I've watched too much Ricky Gervais*, sorry!) continue to torture millions of animals to no effect, wasting billions and failing to save lives (if only this pseudo-science was banned and funds redirected to promising in-vitro and in-silico testing research). BMJ published a series of articles about it two years ago (https://www.bmj.com/content/360/bmj.j4935):

Preclinical animal studies aim to establish safety and efficacy before patients are exposed to new treatments. However, the translational success rate from animal studies to humans is quite low, and the non-reproducibility of preclinical studies ranges between 51% and 89%.1 The inadequate conduct, reporting, and evaluation of animal research underpinning human trials is one reason why big promises of better outcomes for patients so often remain unfulfilled.

Improvements in the design, registration, reporting, and transparency of animal studies are urgently needed. To achieve this, we need a cultural change in which researchers are rewarded for producing valid and reproducible results that are relevant to patients, and for doing justice to the animals being used. The MVA85A vaccine story (doi:10.1136/bmj.j5845),2 is an example of a case where a more thorough analysis of preceding animal studies could have resulted in better targeting of resources in human studies.

Obviously, other tests are being developed too slowly, because the lab animal providers' lobby and thickhead pseudoscientists directly or indirectly block them. They aren't being created at animal research labs either, because no mentally capable person would get involved in this crime in the first place.
I hope they will all get corona and see how it feels to get killed by it.

Tell us how you really feel...
Top

"Really"? Well, I'm tired, because I'e been working until now, and I need to hug some cat.
And you?
Top

From Justin Fox at Bloomberg, for models - some info we know, but some good links too.

And from there - this is from the Mathematical Association of America

Cuchulainn and others, take note of these links at bottom of that page

It's almost like they never attended any math biol lecture after the first.
Top

It's almost like they never attended any math biol lecture after the first.

I am serving some delicious model soup here.

You can make your case about R naught but have a look at those links.

Everyone has been clamoring about methodology and parameters.

Now this MAA stuff provides some ideas for critique, improvement, rallying, relying, whatever suits you best.

Time for sleep - more virus warfare tomorrow! Funny, I sleep deeply these days and dream of driving through the countrysides in Europe. Goodnight.
Top

Who is online In total there are 91 users online :: 1 registered, 0 hidden and 90 guests
Users browsing this forum: Bing [Bot] and 90 guests based on users active over the past 5 minutes
GZIP: On
×