In Ireland we have  No true Irishman says heavy rain. It's too imprecise and dull. The present participle is the preferred form, see 8 -12 above.
"Compatibility means deliberately repeating other people's mistakes."
David Wheeler

While this sounds a bit like a variation of the “no true Scotsman” fallacy, I’ll just take it to mean that the Irish have their own version of the language conventionally (but probably offensively) referred to as English. I can assure you that “heavy rain” is idiomatically correct usage in the US, among both meteorologists and lay people.
Top

Ukrainian and Polish have lots of words for rain. I particularly like "kapuśniaczek" (lit. the diminutive of cabbage soup), which means a small rain. In Ukraine we had small fleeting rains which came locally out of nowhere on a sunny day and passed almost unnoticed - we called them Курячий дощ (chicken rains). Onomatopoeic плюта and сльота are nice too.
Top

This is just outside town, close to airport, I remember I walked through also there and wondered if they had put up some bear fence, but no. And some think they are safe there due to building etc. around. Be aware of surroundings.

In Longyerbyen I did the same as the locals. The taxi driver had a gun laying between the seats in his car. I brought my gun when walking to church, there is a gun cabinet inside the church entrance where you drop of your guns before you go upstairs and pray (or eat free waffles). The church is on outskit of town, behind it is the small mountain (where another person was victim of polar bear some time ago) that was my goal that day (after eating waffles). A gun can save u and the bear, warning shot. This is not about being scared of bears, this is about understanding such tail events are not that unlikely in the land of the polar bear.

Also the food store has gun cabinet where u drop of guns. Kindergarten teacher told me carried gun inside town to when escorting children around.

my plan was originally only to get hold of and bring a big bear pepper spray, as very effective (at least against other types of bear), but not legal there (at least not then). I do not understand the policy against pepper sprays. Even to have one in your bed when camping in tent or under open sky could be good, worst case you spray yourself when asleep and wake up.
Last edited by Collector on August 29th, 2020, 12:51 pm, edited 7 times in total.
Top

"
"Kootte came up to Longyearbyen at the end of July. He should have actually traveled up in March to set up the electric fence that would serve for polar bear protection. But because of the corona, it was postponed."
Top

And not anyone had second thoughts about camping on a site when they were about to install an electric fence against polar bears...
Human stupidity cost another beautiful animal's life and possibly some other humans' tragedy.
Top

And not anyone had second thoughts about camping on a site when they were about to install an electric fence against polar bears...
Human stupidity cost another beautiful animal's life and possibly some other humans' tragedy.

And they had and go to shoot the bear.
"Compatibility means deliberately repeating other people's mistakes."
David Wheeler

Oddly, “bear hugs” do not readily translate into Norwegian.

The farmers party is showing a lot of righteous indignation at the idea that “fanatic meat haters” may get the same sort of government support that is given (for inexplicable reasons) to churches.
Top

No bjørneklemmer in Norsk? Even Spaniards have abrazos de oso! I will have to enrich this language. The most effective way is by introducing the culture of bear hugs.
Top

i can go to parts of Sweden, parts where there is no people, and to Finland and Latvia, Lichtenstein and Greenland without being quanrateened (one return)...  where should I go? 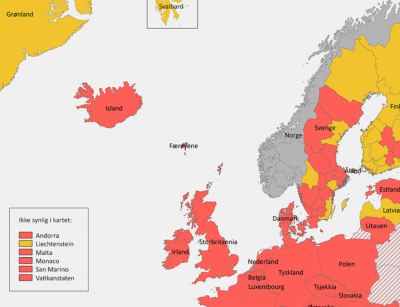 or get a submarine and go to any harbor one wants, unnoticed!
Top

A book about travel to France, then everything could happen!
Top