A while back we discussed the big bang parabolic pde when t > 0. Then what happens when t < 0? Some clever cookie suggested sticking on a hyperbolic pde. Worked great but the monster did not satisfy laws of thermos.
kats: can you remember its name? AFAIR the name contained "Einstein", duh.
"Compatibility means deliberately repeating other people's mistakes."
David Wheeler

General relativity theory cannot match more than maximum two properties (choose between matching mass OR length and time, OR acceleration etc...) of the Planck scale when linked to so called micro black holes (similar problems with Hubble scale), while collision space-time matches all properties of the Planck scale, and even tell what a black "hole" is..  3D collision space-time metric

likely why Hawking and others have been so vague here, not discussing why they only had approximately Planck scale match, much misinformation here also, wikipedia and others tells Hawking first to suggest micro black holes linked to approx Planck mass in 1971, but the same had been suggested in soviet physics journals many years before Hawking suggested the same (but Hawking less mathematical). 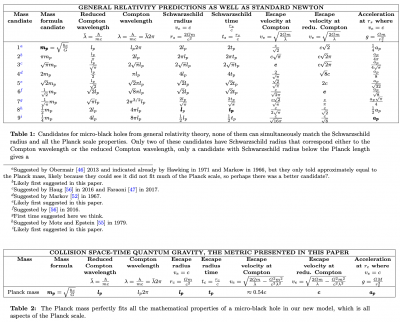 The Planck scale is the God Particle!
Top
×