In fact not that much manual work is needed if the sowing is maintained on time and properly. Biodynamic farming knows efficient and ecological methods for preventing and treating crops diseases and plagues. I wonder if GMO won't complicate things though. I want to run a biodynamic farm when I retire


Shares in Johnson & Johnson plunged more than 10% on Friday, after Reuters reported that the US pharmaceutical giant had known about asbestos tainting its talcum powder for decades.

I thought something was exposed in 2016 when they had to pay high compensations to several hundred women who developed ovarian cancer from using their talc.
Top

I thought something was exposed in 2016 when they had to pay high compensations to several hundred women who developed ovarian cancer from using their talc.

there was another lawsuit this past summer
Nearly $4.7 billion awarded in Johnson & Johnson baby powder lawsuit

A St. Louis jury on Thursday awarded nearly $4.7 billion in total damages to 22 women and their families after they claimed asbestos in Johnson & Johnson talcum powder contributed to their ovarian cancer in the first case against the company that focused on asbestos in the powder. 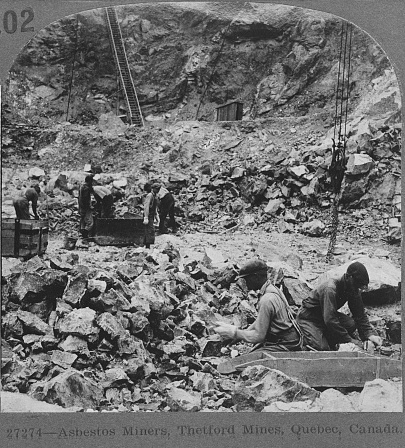 A mining professor from McGill University in Montreal once told me that asbestos was harmless and the reason the asbestos miners got sick and died was because they all smoked.
Quebec nationalized the mines in the 1970s, if "nationalized" is the right word when it's done by the province rather than the country. Once Quebec becomes a country....
Top

"the reason the asbestos miners got sick and died was because they all smoked."

on this last part he could be right, did the professor mentioned if they smoked with filter or not?

they also made plenty of gas masks during WWII with asbestos filter....possibly the masks killed more than they saved ?
Top

Harmless as long as you don't touch it. My grandpa had mixed feelings about the EU directive requiring the removal of eternit.
BTW, as you surely know, the risks combined often multiply rather than add, which likely applies to inhaling asbestos + tobacco.
Top

The father of my best friend died of lung cancer at (OK a bit troubling) about my age. He worked at a railroad workshop, where asbestos exposure was commonplace. Needless to say, he also smoked...
Top

katastrofa "Harmless as long as you don't touch it."
What? unfortunately an old stupid myth made by the industry and gov bureaucrats to calm down people, and yes many even self-proclaimed experts still believes in it.  Asbestos containing eternit keeps giving off asbestos fibers if not very well coated. I guess you have heard about entropy or something like it. Possible/likely in Eastern Europe the risk of  cancer from asbestos containing eternit is somewhat lower than much of Europe as they most places in Eastern Europe only used white (Chrysotile) in the mix. Even if white is dangerous, brown ( amosite)  and blue (crocidolite) much more dangerous (actually not a myth). Well the amount of asbestos used in eastern Europe I think is larger, and I think still no ban in non EU eastern European countries. Russia still mine it in Asbest.  (and USA also still allow it in several products, as they stupidly reversed their total ban on it)

And there is no EU directive against eternit, as eternit is a brand name still sold in big parts of Europe. It is however thankfully a EU directive against asbestos containing eternit and all asbestos containing products, but only against new installment. If they had any brains they would have removed the enormous amounts that was installed long time ago, but most of what was installed is still around, now dusting more than earlier as the binding material (mostly cement based is past its life expectancy) is dissolving. The asbestos fibers on other hand almost last for infinite are free to fly, and to find a new home, such as in a human body.

In parts of USA and Europe they have millions of asbestos fibers per liter in the drinking water, the source is almost always clean, but they transport it in asbestos cement pipes in many towns, and recent research does not look good. Off course precautionary principle was and is still ignored, even for a substance one know are very cancerogenic  This is what happen when one has imbecile government bureaucrats with no clue about how to consider risk, to make sure one have even basic facilities such as safe water. Then many people assume everything is okay because one must trust the government ,  and then dont even ask questions.  And off course people do not only drink water, most of the water is used for house cleaning, showering etc. So it goes in the air. And next these imbeciles spend billions of tax money to  cure cancer  with minimal results. First poison your people (just make sure very long time lag between cause and effect), then make the same people thankful you give them chemo and radiation. At high School I think they told us how dumb the Romans were transporting drinking water in lead pipes. Who said stupidity is not repeating itself?
Last edited by Collector on December 18th, 2018, 12:39 pm, edited 2 times in total.
Top

I'm aware of diffusion. AFAIK, the EU directive tells all the EU countries to utilise all asbestos within ca 15 years. It might be safer for people not to touch it rather than disassemble, transport and utilise it. Especially that in Eastern Europe it's never done with proper safety measures. We are talking about people who use lead ammunition for hunting and pour Roundup on their crops like water. Besides, asbestos looks a lot more innocent if you read what was found in the smoke cloud from burning WTC. Just being realistic...
Top

unfortunately the binding agents started to dissolve so will spread, and makes it yes even harder to remove without spreading off a lot of dust. And yes the removal process will likely be a disaster also, it already is. And yes they need to remove it properly, with double space suites and under pressure zones. gov officials naively assume most people will do so?

September 11: Death toll could rise by millions from 'toxic' asbestos dust   time lag! "In 15-20 years we are going to see a serious health issue here in New York. We haven't even seen the tip of this iceberg yet," Dr Raja Flores   "Hidden in the dust was more than 400,000 kilograms of asbestos, mercury, fibreglass and benzene." "The safe amount of asbestos in the air for someone to inhale is zero. There's no safe amount," Dr Flores said."
Top

From a presentation by some guy from University of Vermont

•The dust from the collapsed towers was "wildly toxic," according to air pollution expert and University of California Davis Professor Emeritus Thomas Cahill.

[ltr]• The thousands of tons of toxic debris resulting from the collapse of the Twin Towers consisted of more than 2,500 contaminants:
–50% non fibrous material and construction debris;[/ltr]

As if you pulverised Norwegian salmon in the air.
Top

another good reason to remove these toxic materials, it is definitely not the last building falling down or taking fire, and not the last time one of their steam pipes blows

A steam pipe ruptured underneath a street in the Flatiron district of Manhattan on Thursday morning, producing a thick geyser of white smoke and debris that contained asbestos, the authorities said.
Top

How do they actually dispose of the asbestos? I can't find any information.
"Asbestos waste must be disposed of in a landfill that has a specific permit authorising it to accept asbestos. You may be able to dispose of asbestos waste in a non-hazardous waste landfill, provided it is landfilled within a separate, self-contained cell." (http://www.netregs.org.uk/environmental ... -disposal/)

Why not put it straight in the ocean or dump on some Bangladeshi village.
Top

Who is online In total there are 82 users online :: 1 registered, 0 hidden and 81 guests
Users browsing this forum: Bing [Bot] and 81 guests based on users active over the past 5 minutes
GZIP: On
×