He felt ill and went for a shower.
Legionaire's?

He felt ill and went for a shower.
Legionaire's?

Plan B: it's mass hysteria.

from what I've seen, they're being treated for "chemical exposure" and Porton Down has been consulted
Top

Our friends from Russia

"near" in the headline means 10 miles according to the text.
It's actually closer to Porton Down (the UK's chemical weapons lab, about 5 miles) than to where the russians were

They're taking the world cup too literally (the Russians).
Top

“We can confirm that the man and woman have been exposed to the nerve agent Novichok, which has been identified as the same nerve agent that contaminated both Yulia and Sergei Skripal”
(snip)
Basu said it was not clear whether there was a link between the two cases, and whether the nerve agent came from the same batch that left the Skripals fighting for their lives.
“The possibility that these two investigations might be linked is clearly a line of enquiry for us,” he said, amid speculation that the victims could have been sickened by residue from the poison used on the Skripals.
Basu said it was unclear whether the two were targeted, but there was “nothing in their background to suggest that at all.”

>> whether the nerve agent came from the same batch that left the Skripals fighting for their lives.

both in this case and the skripals, it's been reported that it was initially thought to be a drug overdose (by whom? passersby? paramedics? I wouldn't recognize a drug overdose)
I thought that was a strange thing to say, until I saw this,
Couple fighting for their lives WERE exposed to the same Novichok nerve agent as ex-Russian spy: Police make dramatic revelation as footage emerges of man found 'foaming at the mouth' being put in an ambulance

Couple, understood to be recreational drug users, are in critical condition after being exposed on weekend
(snip)
Mr Rowley, a registered heroin addict, was lying on his back in a stretcher as the paramedic in a white protective suit pushed it inside as two police officers watched on.
(snip)
A Boots where Mr Rowley picked up his prescription after his exposure, and the Amesbury Baptist Church were also locked down by police. (my note: would the prescription be methodone and/or heroin or something unconnected to his monkey?)
(snip)
Initially police believed the pair, understood to be recreational drug users, had come into contact with a contaminated batch of Class A drugs.
But on Wednesday a major incident was declared after it emerged the substance could be poison - with Scotland Yard and the Ministry of Defence drafted in to help investigate.

so maybe that's the connection, someone's poisoning the junk with novichok?

(It is well known that some of the cybercrime groups are linked to Russian Army.)
Top

I had a near death experience when in an out-of-control train that crossed this bridge at 90 mph. The driver was over the limit.
Blocks of granite were ripped from the station platform as we made our way to the viaduct. 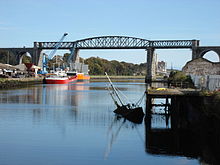 That's why some say that they should be replaced by "AI". Glad that you're still with us.
Top

Not again... Kievan Rus is nowaday's Ukraine, and Russia has nothing to do with that ancient kingdom - no historical or geographical continuity, no traditions. Rus was invaded by Golden Horse and later controlled by Poland and Lithuania. It disappeared from the map long before the tribes of Moscovites living in the cold wilderness to the east, where Rusin's foot rarely stood, started to form a country (Moscovia -> Russia - a mocking name given to it by Ukrainians). It's only the phonetic similarity of two names, but it's like saying that Rome and Romania are the same!
The story about cheeses and Tsar is also rubbish.
I thought you had more respect to history :-/
Top

Who is online In total there are 19 users online :: 0 registered, 0 hidden and 19 guests
Users browsing this forum: No registered users and 19 guests based on users active over the past 5 minutes
GZIP: On
×