An article by Toby Young for the Daily Telegraph was “significantly misleading” when it said that catching a cold could protect people from coronavirus and claimed that London was approaching herd immunity, the press regulator has ruled.
In a decision published on Thursday, the Independent Press Standards Organisation (Ipso) complaints committee ordered the Telegraph to publish a correction over the column, which was appeared in July last year under the headline: “When we have herd immunity Boris will face a reckoning on this pointless and damaging lockdown.”
They sought it with thimbles, they sought it with care; They pursued it with forks and hope; They threatened its life with a railway-share; They charmed it with smiles and soap.
Top

Definition layed down by US Universities that are now working on related new courses for the Fall 2022, I assume.
Top

Definition layed down by US Universities that are now working on related new courses for the Fall 2022, I assume.

Definition layed down by US Universities that are now working on related new courses for the Fall 2022, I assume.

Anyone can stick an adjective onto a concept but it changes nothing i.e. it doesn't make it respectable. Nice try, a long way to go. Remember deep learning, big data.


Yes, this is very exciting, IMO. Moderna and Merck have a joint venture along the same lines:
https://www.biopharma-reporter.com/Article/2022/10/13/Merck-to-develop-commercialize-personalized-cancer-vaccine-with-Moderna
www.financepress.com
Top

[Imperial College epidemiologist Neil] Ferguson was behind the disputed research that sparked the mass culling of eleven million sheep and cattle during the 2001 outbreak of foot-and-mouth disease. He also predicted that up to 150,000 people could die. There were fewer than 200 deaths. . . .
In 2002, Ferguson predicted that up to 50,000 people would likely die from exposure to BSE (mad cow disease) in beef. In the U.K., there were only 177 deaths from BSE.
In 2005, Ferguson predicted that up to 150 million people could be killed from bird flu. In the end, only 282 people died worldwide from the disease between 2003 and 2009.
In 2009, a government estimate, based on Ferguson’s advice, said a “reasonable worst-case scenario” was that the swine flu would lead to 65,000 British deaths. In the end, swine flu killed 457 people in the U.K.
Last March, Ferguson admitted that his Imperial College model of the COVID-19 disease was based on undocumented, 13-year-old computer code that was intended to be used for a feared influenza pandemic, rather than a coronavirus. Ferguson declined to release his original code so other scientists could check his results. He only released a heavily revised set of code last week, after a six-week delay.

IMO the cause was 1) RNG with Neave effect, 2) wha a race condition?

This looks like a solution looking for a problem. Your diffusion should be continuous, not discrete. The PDE already contains the Brownion probabiliy, so no need for that.

Yet, the propagation of COVID-19 exhibits remarkable spatial structure properties.

Indeed, the spatial organization and spreading of epidemics in general reveal important
features of the transmission process. This is especially true in relationwith movements
of individuals who carry with them infectious characteristics. It has long been known,
since ancient times, that epidemics travel along lines of communications. In the black
death epidemic of the 14th century, contagion advanced along roads connecting trade
fair cities, and from there spread inwards leading to a front like invasion of Western
Europe roughly from South to North, pulled by these roads. 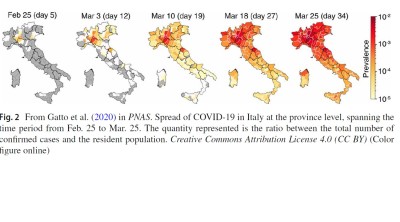 I forgot what we discussed but for the record, I wrote data rich models simulating the behaviour of the population on the level of individuals (bigger Ferguson and done right). They combined the the elements of diffusion or SIR where fitting or enforced by the data. That’s the only way to go imho. But it wasn’t a popular opinion at the time (-:
Top


Yes, this is very exciting, IMO. Moderna and Merck have a joint venture along the same lines:
https://www.biopharma-reporter.com/Article/2022/10/13/Merck-to-develop-commercialize-personalized-cancer-vaccine-with-Moderna