Here's an example of how the meme token game can end  (details)
www.financepress.com
Top

The trial of Kleiman vs. Wright is now ongoing in Miami.
Craig Wright claims to be Satoshi Nakamoto, the creator of bitcoin.
Many people are doubtful, but his claims are not just the claims of a single person: for example, see

Exhibit A: Interview with Stefan Mathews    But, let's hear from the skeptics:
Exhibit B:

Which Exhibit do you believe?
I think this is fascinating because the reputational and economic implications are rather profound -- whichever one is true!

p.s. The premise of the trial is that CSW is Satoshi; both sides apparently agree on that, at least for the purpose of the trial which is to decide if Wright and Kleiman (now deceased) had formed a business relationship.
www.financepress.com
Top

Looks like it's Black Friday for Bitcoin (and other cryptos)...

Still nice as a Christmas ornament though!

So, we have a Bitcoin Santa and there is evidently a Bitcoin Jesus.
I still haven't decided about CSW, but he certainly will ultimately earn a place at the very top or the very bottom of the bitcoin pantheon.

"It's hardball world, son." Indeed, and you don't see this very often.

(and it's still a very expensive tulip/ornament!)
Top

So, Kleiman vs. Wright concluded with the jury awarding the plaintiffs $100 million from Wright.
If Wright is indeed Satoshi Nakamoto and controls the roughly 800,000 Nakamoto bitcoins (a figure from a CSW court filing if I recall), then paying should not be a problem. If he's not, and doesn't have the funds, then that's another story. We'll see what develops ...
www.financepress.com
Top

He either is or isn't Satoshi Nakamoto. And he either wants to prove it, or now wants to deny it, or wants to be mysterious. So pay, appeal, disappear,...!
Top

In my opinion the electricity consumption poses a much larger threat to Bitcoin as opposed to exchanges, governments, and institutions, energy usage has become a cultural issue, and culture is the important dynamic at play for the acceptance of currency. You can track the energy usage here, https://ccaf.io/cbeci/index -- The Cambridge Bitcoin Electricity Consumption Index (CBECI) provides a real-time estimate of the total electricity consumption of the Bitcoin network. 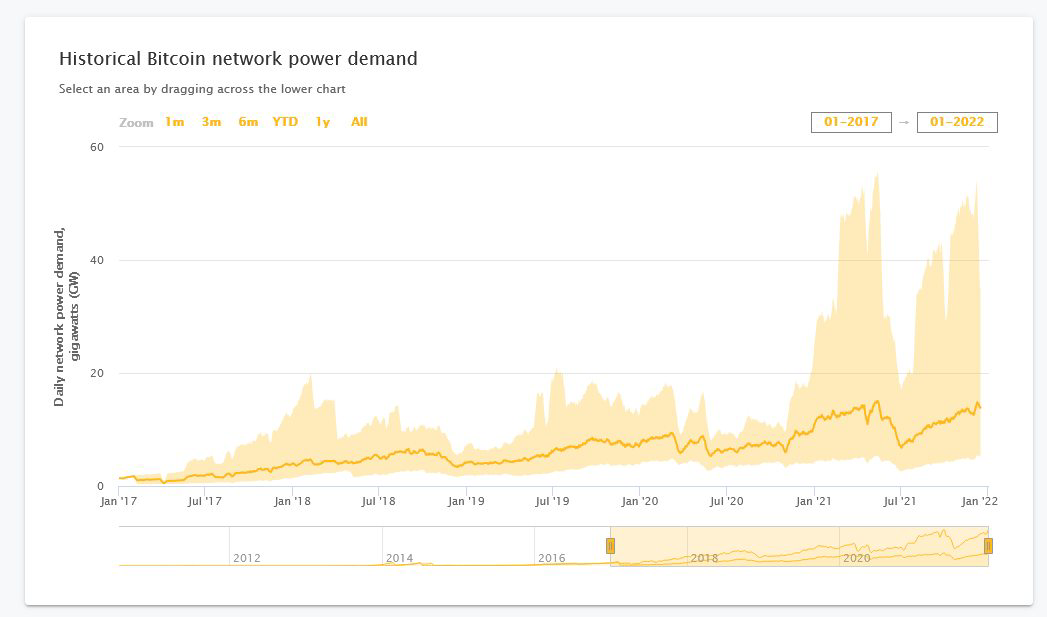 Carol Alexander, professor of finance at Sussex University, said she expects bitcoin to tank to as low as $10,000 in 2022, virtually wiping out all of its gains in the past year and a half.

“If I were an investor now I would think about coming out of bitcoin soon because its price will probably crash next year,” Alexander said. Her bearish call hinges on the notion that bitcoin “has no fundamental value” and serves as more of a “toy” than an investment.


CNBC (Apologies for the source)
Top

Gold and other precious metals do not depend upon some 3rd party to do a transaction between a buyer & seller.
AFAIK, loss of access to internet means bitcoin is temporarily non-fungible.
There does exist a mechanism of attack upon the functioning of the Internet that will be more disruptive than anything seen so far.
Thing is this attack is M.A.D. (Mutually Assured Destruction).  Anyone who launches this attack also runs a good chance of cutting themself off.  The strategic calculus then becomes whether the "own goal" suffered by an attacker is less than the impact to one's enemies. Putin could decide that the suffering inflicted upon the west is strategically more advantageous the suffering he incurs from such an attack.
The internet will be repaired after such an attack.  However, once blockchain investors learn how exposed they are, many (not all) will run for the exits.  That will dramatically drive down the exchange rates for BTX, though probably nowhere near to zero.
Hypothetically, let's assume the above analysis is correct.
If so, then what do you think about the following:
If there were an FX options market you really really trusted with truly reliable clearing,
then would it be worth considering something where you buy puts with strikes closer to current market and sell puts lower than that strike?
That's a question, not a suggestion.
If so, what FX options venue do you consider to have reliable clearing?
Top

Well, that was quicker than I expected."Bitcoin is now trading below its 200-day moving average (DMA) for the first time since September"
Top

Looking at the sheer diversity & naming of cryptocoins is nothing short of a Monty Python skit about Tulip mania.
This makes the OTC pink sheets look downright blue chip https://finance.yahoo.com/cryptocurrencies/?offset=0&count=100
To put this in context, the price/unit & market cap of gold is not convenient for all investors, so alternative precious metals include platinum, silver, exotics (palladium, rhodium, etc).
Now imagine if somebody came up with a way to keep minting an unlimited number of new variants of precious metals.
That seems to be the situation with cyptocurrency.
Top

It has probably already been done (see "4919" above), but I think there's a strong potential for a scam um, business opportunity in creating cryptocurrencies one letter off from popular existing currencies. So "Betcoin," "Batcoin," "Botcoin," and "B!tcoin."
Top
×