Free speech is under attack everywhere and even free bodies are under attack, one must fight even bears to keep sovereignty over own body.

Below tooth from the Polar Bear that attacked my father in the 1960s, sorry but he had no choice but to take it down, if not I would not be born (sorry to disappoint people trying to suppress free speech and bodies.) 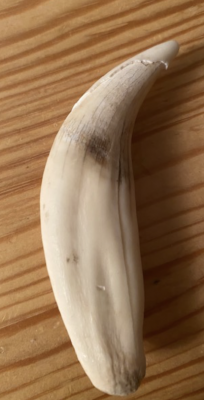 A lady, admiring my dog, asked what his name was. I thought I'd try woke so said "You've just misgendered my dog. It's a she." I don't think she quite got the topical gag.


Yet one episode is missing from “The Simpsons” lineup: Titled “Goo Goo Gai Pan,” the episode from season 16 centers on a trip to China by the show’s namesake family. Along the way they encounter a plaque at Tiananmen Square in Beijing that reads: “On this site, in 1989, nothing happened.”


Yet one episode is missing from “The Simpsons” lineup: Titled “Goo Goo Gai Pan,” the episode from season 16 centers on a trip to China by the show’s namesake family. Along the way they encounter a plaque at Tiananmen Square in Beijing that reads: “On this site, in 1989, nothing happened.”

The WSJ were rather negligent in failing to make mention of “Over the River and Through the Woods” as the inspiration for the name of the episode. But, as has been clear for a while now, Hong Kong is China. Whatever deal John Major thought he cut is a late deal, pushing up daisies. As he said, “Hong Kong will never have to walk alone”. Right!
Top

A long-running comic in the LA Times was cancelled due to the use of an ethnic slur.
This comic had run there for 10-20 years (I don't know exactly). I attach the offending comic also as a pdf.

Apparently, there is some disagreement on the severity of the slur. Even accepting that it is a slur, does the punishment (cancellation) seem proportionate?

From a google, I see only one other historical incident with this comic from 2012, where some readers were offended:
'9 Chickweed Lane': Some readers not laughing

Is it the abbreviation of the nationality that is the problem?
Top

Let me add that I'm sorry to see this comic go. I only subscribe to the LA Times for the comics and the covid stats, and that comic is one that I used to read daily. Yes, it was a mistake, but cancellation is too harsh a punishment -- I wonder if they gave the creator an alternative? I hope his syndication sales hold up.
www.financepress.com
Top

As far as using that particular word because of the war (as discussed on stackexchange), all I can say is it reminded me of the following, with one particularly classic line:

It's funny -- I read that comic for years and always assumed it was drawn by a woman, seeing "Brooke McEldowney", which sounded like a woman's name to me. Plus, the recurring theme was primarily couples kissing -- kissing usually initiated by the women in the strip. Only after it was cancelled, did I realize it was by a man!
www.financepress.com
Top
×