Trump, while on a minor footnote letting Bolton and Pompeo work to start a war with Iran, is waging a full frontal attack on that constitution thing. Very unfair! Congress should not have any insight into anything, because they don't like him anymore.
Top

The clown has decided to stop doing his job and just hold his breath until he turns blue in the face unless Congress stops investigating him for his obstruction of justice, treason, and other affronts.
Top

While I think Julian Assange is an asshole with no redeeming qualities to speak of, Trump just managed to put anybody with a hope of the US remaining a free country on his side.
Top

Trump and team now fully endorse the use of counterfeit videos in the election campaign. Given that nothing he might do (or would appear to do) could possibly upset his base, this feels a bit one-sided, but we can always hope that US law will be on our side. One way or another, Zuckerberg will probably make money from this, though.
Top

So, the GO fucking P just closed down the last abortion clinic in the state of Missouri. I know nobody else around here cares, but it's still a pretty big deal for anybody with a concern for women's right to control over their own bodies.
Top

I'm quite terrified - especially that there seems to be fertile ground for ideologies bearing such monsters across the world (puns not intended - not in the mood).
Top

So, the GO fucking P just closed down the last abortion clinic in the state of Missouri. I know nobody else around here cares, but it's still a pretty big deal for anybody with a concern for women's right to control over their own bodies.

Those protesters dressed as characters from the Handmaid's Tale no longer seem like hyperbole.
Top

I think these states passing egregiously unconstitutional abortion restrictions have just shot themselves in the foot. They have provided a vivid demonstration to the Supreme Court of why they can never return this issue to the states -- as the disparity of outcomes for women is laughably beyond their "undue burden" language in Planned Parenthood v. Casey
www.financepress.com
Top

A Supreme Court stuffed to the gills with Trump acolytes and born again types will happily do that. As a first step....
Top

I agree that Trump probably thinks so. But he has been disappointed in his legal picks before -- let's hope he's disappointed again. To return abortion law to the states at this point, given the precedents and recent noxious behavior by various states, would bring humiliation to the Court. I believe all the justices would acknowledge that.

Someday, there will be proven artificial wombs -- which would seem to resolve the very difficult question of "when is too late?" technologically. If that can be invented, presumably so can a safe transfer of the embryo from the woman to the device. That would make almost all fetuses/babies viable at arbitrary early ages, hopefully satisfying just about everybody.
www.financepress.com
Top

And then everyone will want one. I think the US economy is heading towards an unstable singularity where its sole purpose is to make anyone involved in healthcare really rich at the expense of everyone else.
Top

Here in Jordan, the whole government apparatus is nervous from news travelling around about the upcoming "Deal of the Century" it even sounds like one of those "CDO's"...It seems they want to turn "Jordan" into "Palestine"!! Is that even possible ?? I guess in the laws of the "Jungle" it is certain, but not in a civilized world. Also, our neighbours are not being clear about what is being planned regionally. Something big is cooking here in the Middle East, and it ant' fun!
Top

I have no local knowledge, but given that the US policy in the Middle East is largely run by Sheldon Adelson, Jared Kushner and John Bolton, with an eye toward making sure that the MbS emoluments keep flowing to Trump, I would not be surprised. I am pretty sure Trump could neither spell Jordan nor place it on a map. Meanwhile, he is busy generating the next global recession with his tariffs, which are most likely illegal under US law, let alone in violation of existing international agreements. But, why (expletive deleted) would he care? No law actually applies to him...
Top

It doesn’t matter how rich they are, Americans can never find a decent tailor for white tie.
Top 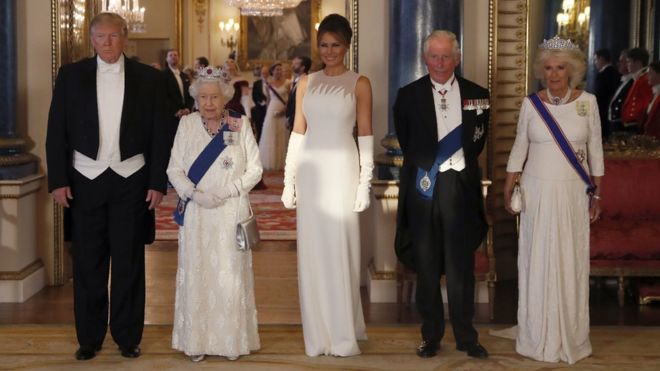 He looks like a boy coming home in a school uniform, with the shirt hem pulled out from the trousers.
Top

Who is online In total there is 1 user online :: 0 registered, 0 hidden and 1 guest
Users browsing this forum: No registered users and 1 guest based on users active over the past 5 minutes
GZIP: On
×