So CS just appointed one of the Lehmann brothers as Chairman, since their prior head had followed too closely in the footsteps of Cummings and Johnson. Very regretfully, of course. They did stop short of offering thoughts and prayers, though.

From Bloomberg: “Credit Suisse Group AG’s Chairman Antonio Horta-Osorio resigned after just nine months in the role, following a series of missteps including reported breaches of Swiss and U.K. quarantine rules that eroded confidence in his leadership.

I doubt actually cod liver oil is best source of D vit. Supposedly they destroy the natural D vitamin in the processing there and have to add D into it after processing, plus high dose tran will give u too much A vitamin (A toxic at high dose). Further there was just on front page of a paper here that too much Omega 3 was linked to some potential heart problems, I have not looked into the paper so not sure if junk science or not. So yes I take high concentrate D3 capsules, and in summer expose my muscles to the sun.


Vitamin E all the way. I don't know if it helps with Covid, but my corpse will have beautiful skin.

The former scientific director of FHI of Norway (similar to CDC in USA) today went out and recommended make sure one have enough D vit and some minerals like zinc before one get covid... this some of us have talked about for years already..

Well when health tops comes with such good advice it is likely a good indication pandemic soon is over? Well Denmark has declared it more or less over already (second time).

I notice again countries where D status in general was good had very few death compared to countries only relying on vaccines and bullying people. And yes the Swedes canceled their tran culture more than 50 years ago, sorry to repeat it, likely costed many lives.

ahhh why went so long to say it, the health tops like most quants have little real life understanding of risk-reward decision making when limited but still quite good information.
Top

"Vitamin E all the way" idiots take it in large dose even...   get E through your food!
Top

"Vitamin E all the way" idiots take it in large dose even...   get E through your food!

I did try smearing my body in peanut butter. All it did was attract mice. Now who's the idiot!
Top

Norway removed almost all restrictions now, no distance restrictions, face masks or so. This despite very high infection rates now, but very few get serious sick from it (D vit culture, vac ++ , doing much better than most countries ..).

How is canda doing? the land of freedom....
Top

The Canadian truck convoy protestors are a motley collection of just what one would expect to be involved in such a protest - racists, science-deniers, gun nuts, misogynists, all spectacularly misinformed f**k-wits. It is already known that foreign money has flowed in from very dangerous players in US and elsewhere, Putin could easily have a hand in this. The protesters are being used by much more dangerous people and they are of course blissfully unaware of it.

The major practical problem is, as always in Canada, one of jurisdiction. Unlike Washington DC, the Canadian capitol, Ottawa, does not have any special territorial status within Canada, so the federal government cannot intrude into provincial and municipal affairs without either being invited by the provinces or declaring the War Measures Act. Biden’s people embarrassed themselves earlier this week by plainly demonstrating they do not understand the constitutional differences in Canada – Trudeau can only act by declaring a life and death national emergency.

The Premier of the main province involved, Ontario, is facing an election in June, and was until a day or two ago simply too cowardly to act, wanting the feds to take the (unconstitutional) lead to the response so that the feds would take the flack for it. Things are in motion now given that the Ontario Premier has finally acted, and the end may now be in sight.
Top

Norway government now also told people did not need to be in isolation even if they knew they where infected with Covid-19 (such as confirmed with home test or pcr).
https://www.aasanetidende.no/nyheter/2022/02/12/fjerner-meteren-munnbind-og-krav-om-isolasjon/

(ps the top management are not only truck drivers, some very well educated in medicine and infection diseases, end the head of energy even a bachelor degree in culture.)

No distancing rules, no mask requirements, no rules of isolation if infected... and it is not like we do not have high infection rates..We are actually even according to the prime minister in an infection wave, with perhaps even increased number of infections.

Some foreign government must have a hand in this, some said Cuba or perhaps even Turks & Caicos  or even Canada ? I have no idea I just follow the orders (too the pub)
Top

I actually passed the local pub early in the evening, I was thinking of having a beer, but it was totally packed, mostly old people 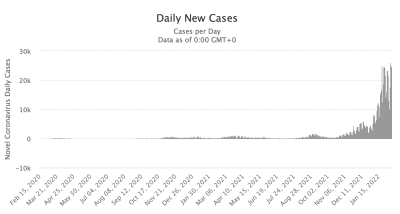 I am quite sure we will do better than Canada, New York State etc.... because more of the toolbox are used here... if new more aggressive variant they will take new measure, now only rule about is to try stay home 24 hours after fever or something.

To follow science is not the same as cherry picking science, it has never been...(only in politics), millions of lives went down due to one sided measures in many countries.

but interesting to see, interesting to follow Norway death numbers next few months, pubs are packed, museums, hardly any with face masks, no distance rules, no isolation at home (it was even earlier on, only 5 days since symptoms start, not since test, much shorter than most countries)...

mostly omicron here now that seems quite mild for most, more aggressive variants could emerge...time will show..
Top

Norway fully vaccinated 73.38%, fully + partial vaccinated 79.12%, Covid-19 Death per m 276 (under viking freedom, almost all covid restrictions removed, except off course some extra protection against the weak in hospitals etc.  )

will indeed be interesting to see the results of the strategy here going forward next few months...(and we have more urgent things to think about, like get electricity price down so students can get permission to shower more than 3 minutes)
Top

It is so far unclear which scenario Mr Trudeau would rely on to justify the use of the Emergency Act - none of these four scenarios have been clearly present in Ontario.

so will the truck drivers be arrested for Espionage? or more likely religious believes, one was seen worshipping the beast (also known as his monster truck)
Top

It is so far unclear which scenario Mr Trudeau would rely on to justify the use of the Emergency Act - none of these four scenarios have been clearly present in Ontario.

so will the truck drivers be arrested for Espionage? or more likely religious believes, one was seen worshipping the beast (also known as his monster truck)


No, I think this one is pretty clear. It’s all about the last bullet point, undermining and overthrowing the constitutionally established government. Very little to do with trucks or truckers at this point. Just your garden variety right wing anarchists.
Top

"Very little to do with trucks or truckers at this point."

The BBC Title on the link I gave and quoted from was "Canada trucker protest: What powers will Emergencies Act give Trudeau?

on the other hand extreme government measures against protesters can indeed give fuel to small extreme groups of protesters...
Top

Yes, although you will notice that the story itself doesn’t really mention truckers, but does point out that it’s all about creating chaos to protest against government in general and Covid vaccine mandates in particular. I see there is now a bunch of Norwegian copycat assholes planning a “Coronakolonne” (aka Freedom Convoy Norway) to wreak havoc in Oslo. There may even be a truck involved. I wish them nothing but the worst, but like Canada, Norway tends to give miscreants like that the silk glove treatment.
Top
×