That was a massive bailout by the BOE of an incompetent government. Draghi-like, in fact. Triggering global dislocations of the financial markets, on top of the ones that were already there. This isn’t over yet. 1x1 year ATM Sonia swaptions were quoted with vols in the 270 bps range today. That’s a lot.
Top

“The British pound is nosediving. Here’s why Meghan Markle is to blame,” by The Daily Mail

Sterling back where it was. And we are not in a recession.

I hope you all enjoyed the hysteria! I'm sure there'll be plenty more where that came from!
Top

We're back on track. 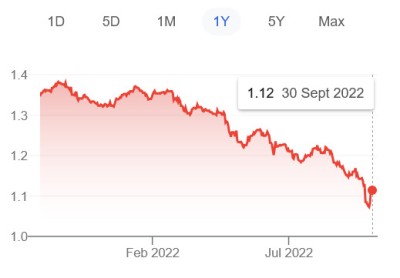 And a good opportunity to beta test the polymer-based printing press.

Is the goal of tax to

A) raise money for public services
Or
B) punish people for earning money?
Top

So I guess it is quasinomics after all, since he evidently came up with the chaos-inducing tax cut all by his lonesome. The prime minister knew nothing about it, let alone the rest of the cabinet.
Top

He underestimated the power of envy.
Top

I guess he never encountered the writings of Axel Sandemose https://en.m.wikipedia.org/wiki/Law_of_Jante
Top

We’re making light of this, but we are actually talking about the new head of what is still (for however long) an economy more important to the world than those of Brazil and Turkey. It’s hard to be less competent than her predecessor, but she’s certainly making an effort, and enlisting quasi to help move the ball forward. I think we have another thread on democracy, but the UK may make even Georgia (the state, not the country) look OK on that score. Which is not good!
Top

And if we’d had this hysteria and short-termism in the 1980s we would have had Michael Foot or Neil Kinnock as PM.
Top

I guess he never encountered the writings of Axel Sandemose https://en.m.wikipedia.org/wiki/Law_of_Jante

Me neither! Looks like his satire has gone the way of Orwell's. Except that it's not available on Amazon, at least not in English.

I could not abide such conformity and homogeneity.
Top

I guess in Britain a rigid class system is seen as a feature rather than a bug, but a representative government is naturally more responsive to the desires of the wealthy -- they have more control over whatever passes for the news media -- and more income inequality exacerbates that problem and makes it more entrenched and more difficult to counter.

And this is sometimes excused by the notion of meritocracy, the notion that the wealthy are selected for from among the best and the brightest of society, who properly should control things.

I see it more as trying to deal with people who are continually trying to bring to endgame something that I don't think of as a game that anyone should win. If it's a game at all.
Top

My experience is the exact opposite! Sociopaths spend most of the evening down the pub, followed by a spot of gratuitous knifing. The wealthy are excessively altruistic. The common oik is more likely to steal the charity collection jar.

The main media in the UK is run by the BBC. And BBC employees are almost entirely posh boys and girls (except for some audience facing, chosen for their common accents). Probably 90% leftie (maybe less, but others too afraid to speak out!). I assume it's a tribal thing...they are left wing but probably aren't really sure why. They are, to misquote Cuch, stuck in a view of the UK from the 1950s where the Conservatives are the baddies. And, of course, Channel 4 with Jon "F**k the Tories" Snow, son of a bishop, grandson of a general, private school. Watch his recent documentary, great insight into the leftie mind, it's all about all the amazing events he's been involved with, and coincidentally the late Queen was also there. The Queen first met him when he was a young boy, and what an honour it was for her.

You should watch that old TV experiment in which the boss of Pimlico Plumbers revealed the salaries of all employees...to see what happened. What happened was nothing like settling "upon a level of compensation for themselves that keeps them comfortable and that otherwise lets everyone else around them do all right." Before the salary reveal they were all happy. And they were happy at the end. Guess why!
Top
×