Pruitt deserves his own sub-thread in the 100 last days of Trump topic, don't you think?

Mocking the EPA while driving a VW is fitting in some way..
Top

I'm wondering if this is a signal that President Trump has already won the Nobel Peace Prize
Traditionally there's after the award ceremony. The organizers just cancelled this year's concert,
Top

It seems to have been an issue with sponsors dropping out, most recently REMA 1000, a low end grocery store chain.

In unrelated news, e.g. lead headline on Bloomberg yesterday and FT story today, significant build-out of North Korea's nuclear missile capabilities have been detected by satellite imaging. But nobody saw that coming, because dealing with North Korea is like winning trade wars: easy!
Top

So, a rafter of Republican senators went to Russia today; tongues curled in order to suck up to Putin. He was too busy to see them, but they pressed on anyway, making sure not to make any awkward mention of Crimea, or that election meddling thing. Because, you know, we like them and don't want to make any trouble before the very, very bigly summit.
Top

the congressional delegation met with foreign minister lavrov and russian lawmakers, but not putin
Richard Shelby, the democrat-turned-republican from alabama:

“We have a strained relationship, but we could have a better relationship between the U.S. and Russia because there’s some common interests around the world that we could hopefully work together on.”
(snip)
“We could be competitors—we are competitors. But we don’t necessarily need to be adversaries.”
(snip)
“We’re hoping that coming out of the Putin-Trump meeting in Helsinki, it will be the beginning, maybe, of a new day. We will have to wait and see and go from there. But we recognize that the world is better off, I believe, if Russia and the U.S. have fewer tensions." 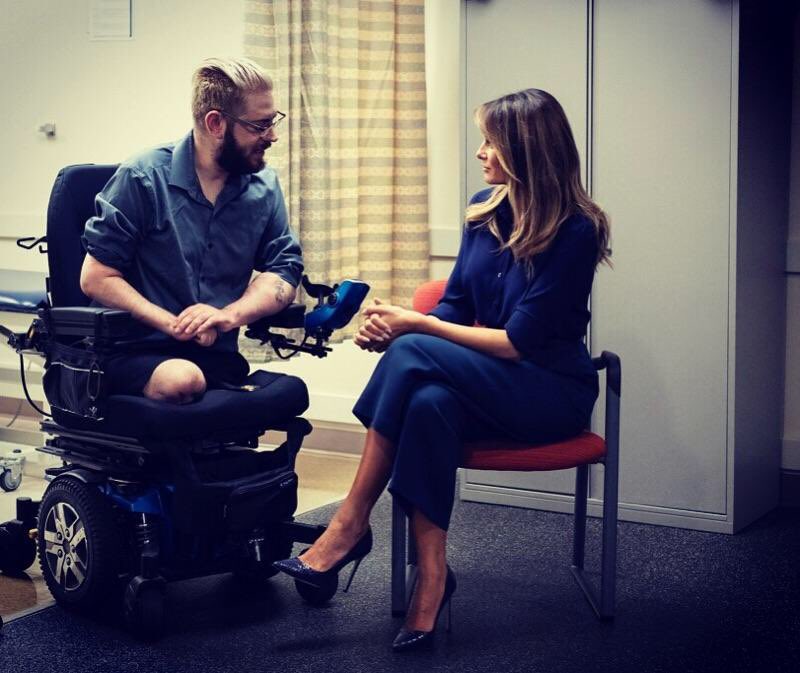 the first lady made a surprise visit Tuesday to walter reed medical center where she visited with injured vets.
God bkess you, Mrs Trump.
We need to get those troops home from Afghanistan and Iraq (and wherever else they are). I don't know what we're fighting for any more. Perpetual war for perpetual peace?
Top

I may not agree with Professor Dershowitz on many of the issues, but he's a good and decent man who believes that everyone should have the same rights, even people with whom he disagrees with.
If you remember the Illinois nazis in Blues Brothers, in real life Professor Dershowitz was the lawyer who secured their right to march.

I for one am eternally grateful to Professor Dershowitz, and I'd be happy to be his friend if he needs new friends because of this.
Top

It's a feature of male bonding that we say outrageous things, insult other men, make fun of them, etc. to establish who can be trusted in our social circle...and who is a waste of oxygen. Supporting Trump or Brexit seems to have a similar effect. I can't imagine anything more cringingly awful than having to go to a cocktail party with people who need safe spaces.
Top

Can we invade Venezuela?
Top

During her confirmation hearing for the appeals court position, Ms. Feinstein questioned Judge Barrett about her public statements. “You have a long history of believing that your religious beliefs should prevail,” Ms. Feinstein told her. “The dogma lives loudly within you.”

That phrase is now a slogan in the culture wars, and it appears on T-shirts, tote bags and coffee mugs, and some social conservatives hope a Barrett confirmation battle would energize and unite the president’s base before November’s midterm elections.

What caught my attention was the T-shirts. I never realized. Sure enough: T-shirts
www.financepress.com
Top

Von Trier would be proud of this one.
Top

Pruitt deserves his own sub-thread in the 100 last days of Trump topic, don't you think?

Mocking the EPA while driving a VW is fitting in some way..

Trump loses another great member of his team. Sad!
Top

Mocking the EPA while driving a VW is fitting in some way..

Trump loses another great member of his team. Sad!

So, he will be replaced by his deputy, a lobbyist for the coal industry, so things may not change much in substance. But Pruitt did stand out as simultaneously being the most personally corrupt and most destructive member of the Trump government. Aside from the boss himself, of course.
Top